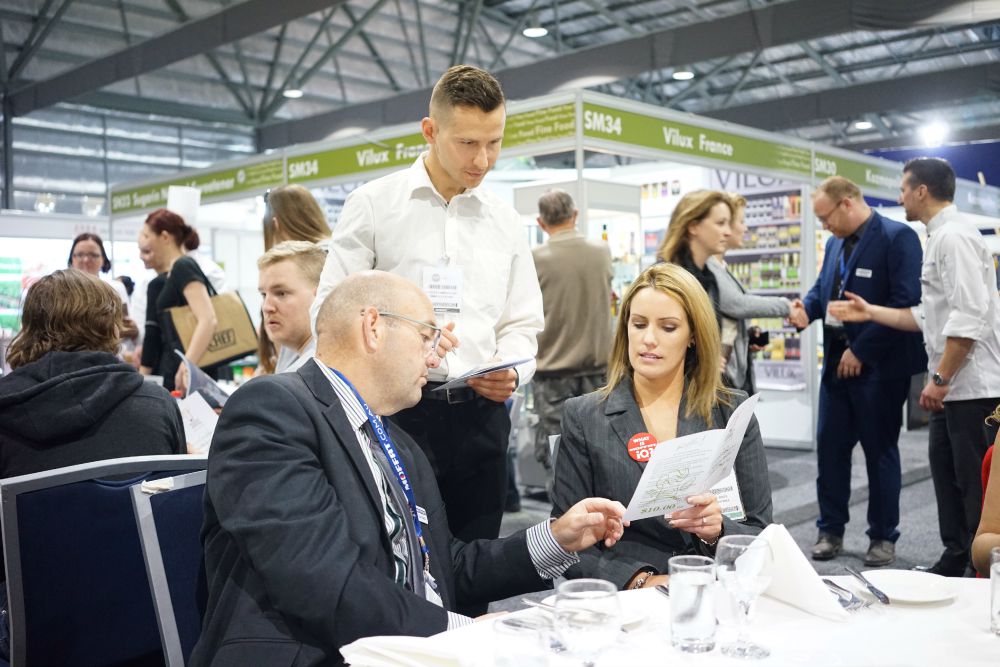 The 2015 Australian Culinary Challenge was highlight of the year in culinary competition in Australia, held at the Sydney Showground and Sydney Olympic Park as part of Fine Food Australia from September 20th – 23rd inclusive. Chefs, trainees and apprentices pitted their skills against each other and against the clock, competing for a share of cash and prizes. This year’s exciting competition highlights included the inaugural ‘Fonterra Foodservice Battle of the Pacific’, Nestle Golden Chefs Hat National Final celebrating its 50th Year Anniversary & Hospitality Training Network National Final.

The culmination of months of training by the competitors individually & in teams paid off with over 200 medals in all colours presented over the course of the 4 day event. The major awards presented on Wednesday evening at Mecure Parramatta totalled $20,000 in cash & prizes sponsored by Fonterra Foodservice, Peugeot Salt & Pepper mills & Tanita Scales.

Sunday morning the first 10 live entrants hit the kitchens at the same time NSW, Victoria 1 & South Australia started cooking in the Fonterra Foodservice Battle of the Pacific. The pace was manic for the first hour as entrants familiarized themselves with the kitchens filled with equipment from Moffat, Robot Coupe, Net Chef, Mak Catering commercial Kitchen Hire & all the utensils on loan from Northern Sydney Institute of TAFE. Nestle Golden Chefs Hat Final first 4 teams commenced at the same time lunch service began for the restaurant & the cooking arena was alive with aromas emanating from all kitchens including the chefs lounge where chefs & sponsors networked & the barista’s from Hennessy coffee kept all fuelled with caffeine.

Monday Auckland 1, ACT & WA battled it out in the restaurants & the record number of entries in the static competition began to set up. Nestle Golden Chefs Hat Final 5 teams heated up the live kitchen arena & MC Peter Howard had a busy time covering everything at once. Perfect Italiano was showcased in the Chefs lounge & the pizza oven worked overtime feeding hungry competitors, members & sponsors.

Tuesday it was the HTN & Futura Apprentice Chef Culinary Competition that started first of 2 days jam packed with individual events filling all the kitchens till 5pm. NSW Juniors, Victoria 2 & Otago challenged each other in the restaurant live kitchens & tables full of sponsors were treated with some great food. Sweets using Nestle Panna Cotta & Crème Brulee were indulged by those that visited the chef’s lounge.

Wednesday 35 competitors vied for the top honour of being named Most Outstanding in their class when they completed the last their live competitions, most outstanding chef was hotly contested & came down to the wire in the last event. Auckland 2 & Vanuatu battled it out with home grown Tasmanian team in the Fonterra Foodservice Restaurant kitchens. Farmer Joe’s & Heng Australia provided sustenance for hundreds of judges, competitors, sponsors & members who visited the chef’s lounge during the course of the week.

The Australian Culinary Challenge Awards presentation was the highlight of the week with the room packed with chefs eagerly awaiting final results for the major awards & presentation of medals & prizes for the 12 teams that competed in Fonterra Foodservice Battle of the Pacific. Chef Kurt Von Buren topped off his week as Chairman of judges providing an awesome spread of food & with sincere gratitude thanked to all who had taken time from busy schedules to judge & scrutineer at the event & at NSI Ryde in the prep kitchens. President Neil Abrahams “This has been an awesome event & the biggest one to date in NSW, the chapter committee & those who have assisted in the organisation of this event are to be commended for their passion & dedication in making this competition so successful in 2015”