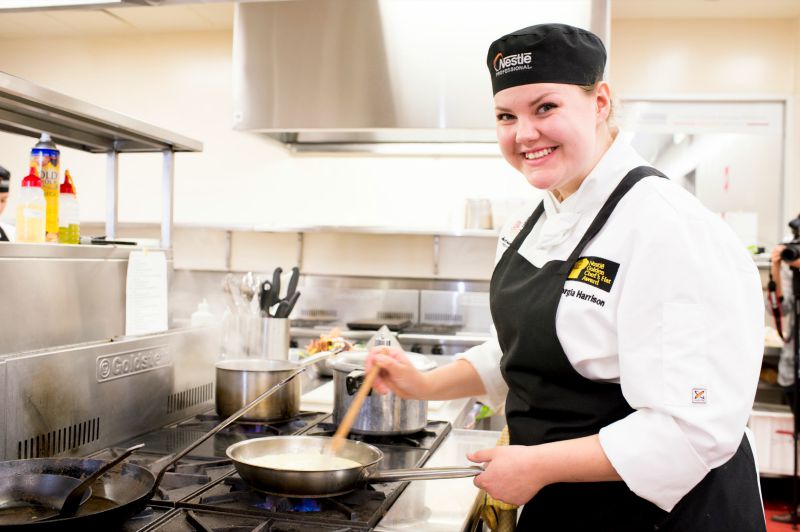 An entrée of trout ballotine with cashew milk, trout tartare and egg white caviar, main course of braised beef short rib and tortellini textures of pear, celeriac and carrot, and dessert of lemongrass and ginger semi-freddo with brulee disc and mandarin fudge will take two young Victorian chefs to the national final of the 2015 Nestlé GOLDEN CHEF’S HAT AWARD.

Press Club power chefs Aimee and Emma will be cooking alongside fellow national finalists from around the country, at Fine Food Australia in Sydney this September, in front of a live audience.

The 2015 line-up includes dynamic ACT duo Georgia Harrison and Amanda Polsen, who won gold to secure their place in the final for the second year running,

Georgia and Amanda were pleased with their performance, particularly the execution of their dessert that had many components, “Every free moment available to us both was spent practicing and preparing for the competition, and to be finalists this year again is completely unexpected.”

Reflecting on her 2014 finalist experience, Georgia says, “It opened many doors for me, I met so many people in the industry, it really accelerated my career, it made things happen.”

This week saw West Coast Institute host the WA heat, with young guns Brody Young-Steedman and Hayden Bilton, both aged 18, out-cook some of WA’s best young chefs to cement their place in the final.

Ending the regional heats on a high yesterday saw one of this year’s youngest competing chefs secure a place in the final to represent Tasmania. Luke Roe, aged 17, and second-year apprentice teammate Brigid Mallett won over the judging panel with a menu of trout, lamb and poached pears.

Australian Culinary Federation Competition Director, Deb Foreman said the Tasmanian final was one of the best the competition has seen this year, “It’s the biggest Tasmanian final we’ve ever had and the overall quality of the dishes was outstanding. Luke and Brigid were up against some talented chefs but they kept their focus. The flavours in their dishes were spot on and their kitchen work was impressive.”

Year 12 student Luke said the win might well influence his future career path, “I was planning to either go to university and study teaching or do an apprenticeship and I’m definitely leaning more towards the apprenticeship now. I feel I’ve already learnt a lot from the experience.”

Celebrating it’s 50th year, Australia’s longest running culinary competition for young chefs will award the national winning team what promises to be a career kick-starting trip to South Africa, for a once in a lifetime food safari experience.