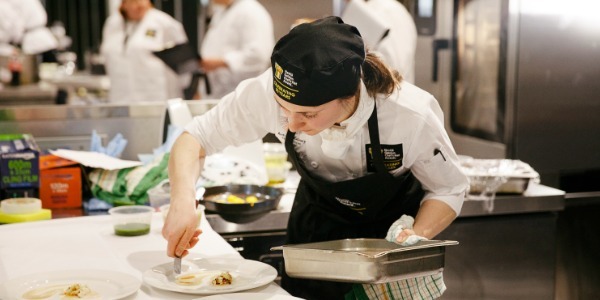 The stoves were hot and the was pressure on, when young chefs from Queensland Metro stepped up on Saturday 3 June, cooking-off for the chance to kick-start their culinary careers in the kitchens of TAFE Queensland (Southbank Campus) to score a finalist team spot in the 2017 Nestlé Golden Chef’s Hat Award.

Kicking-off the first of nine regional heats across the country, 17 teams from Queensland Metro were in the line-up, creating two-course menus carefully thought out to impress the judging panel for the chance to win medals scored against strict judging criteria to nationally recognised standards.

A 2015 national finalist, Sammuel was relieved that he and new teammate Eve worked well together on the day and is excited to be representing Queensland Metro at the national final in September.

“I think it definitely helped having experienced the competition before, I knew what to expect. Eve and I have been working together at The Brisbane Club for three years now so we know we can count on each other under pressure. We’re really excited to design a show-stopping menu for the Sydney final and will be going all out to hit a home-run for Queensland!”

While Eve, having never competed in a professional cooking competition before said of the experience, “It was so much fun and I’m just so pleased my first attempt at this competition has gone so well and can’t wait to try our luck in September.”

The winning team from the Queensland Metro heats have secured themselves an all expenses paid trip to the National Final in Sydney this September, where they will battle it out in front of a live audience in purpose built kitchens at Fine Food Australia. This year’s national champions will be awarded a once in a lifetime culinary trip to Vietnam.

The Nestlé Golden Chef’s Hat Award has been running for 52 years and is Australia’s longest running culinary competition for young chefs. 2017 has again seen more teams enter across the country than ever before, with this year’s finalists set to go on to be some of the industry’s brightest talents.

Executive Chef at Nestlé Professional, Mark Clayton says, “Taking part in the Nestlé Golden Chef’s Hat Award makes you push yourself to the next level. Competing is vital to the professional development of young chefs, you learn so much from this type of experience.

Putting yourself up to be judged on your culinary talent is tough, but this is ultimately how you hone your skills, build your networks and get your name out there.”