Sydney gets a Taste of World’s Best Restaurant 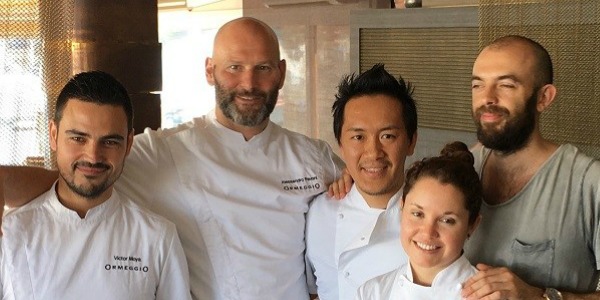 A collaboration between Ormeggio’s Alessandro Pavoni and Lumi’s Federico Zanellato saw the international chefs create a four course menu served for one night only at each restaurant.

The two chefs combined their culinary knowledge to produce a truly global dining experience with dishes that combined Italian, South American and Japanese flavours with playful titles like “what a mole” and “oops I dropped it again”.

However, with the tyranny of distance, and coming off the back off a very busy season, the chefs didn’t have a lot of time to pull the menu together.

“The cool thing is the menu is very spontaneous, coming straight from their minds but never tested,” says Pavoni.

“It was very hard to try all the dishes and get the right ingredients. They didn’t know about all the ingredients here, so there were adjustments.”

Zanellato was there when they first arrived and saw the produce they were working with, which threw up immediate challenges, particularly for Takahiko’s prawn dish.

“They were looking for a really nice red prawn which they use in the Mediterranean but here is impossible to get,” says Zanellato. “We tried three different prawns but they didn’t like them, but then we moved to scampi from New Zealand which is really consistent.”

Tagle’s mole dish was a simplified version of a mole she normally produces, with a mere 20-plus ingredients.

“We made it with the base of a Mexican mole but adding algae,” she says.

“That is served with suckling pig at room temperature that has been marinated (Japanese-style) with shrimps and algae. It’s very umami.”

Among the many ingredients was a native Australian one, which was used for its acidity.

“We use finger limes in our first dish,” she says. “The texture and flavour are very interesting.”

Although not on the menu, the two globe-trotting chefs were also introduced to Vegemite, which Tagle diplomatically says could be used in “many” preparations.

Pavoni hopes to have more of this calibre of collaborative event in the future, despite the challenges.

“Four new dishes never tested before at this Michelin-star level and not knowing the produce or the country for 140 diners – it’s hard!” he says.