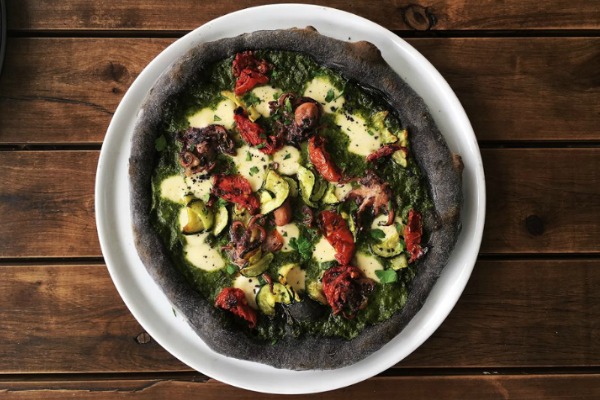 While there’s been an explosion of interest in traditional Italian pizza, some pizzerias are refusing to follow custom. Instead, they’re building their own craft and experimenting with bases and toppings. By Madeline Woolway. 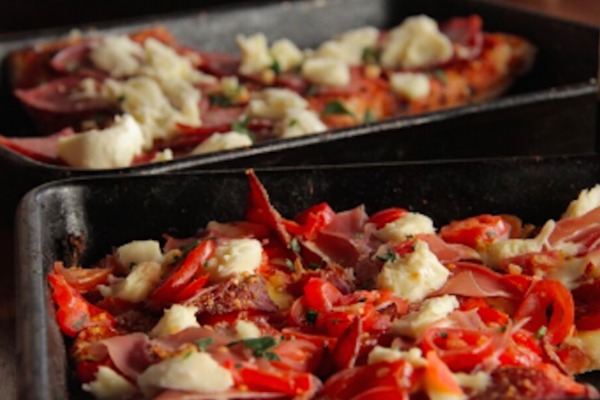 Theo & Co Pizzeria has carved out a space for itself in the Perth dining scene by thinking outside the square – even if some of their pizzas are shaped like one. The pizzeria, founded by Theo Kalogeracos, is known for its unusual toppings as well as its unique bases.

“Our pizzas are made fresh in-house every day. The skillet pizzas are Chicago style, deep dish pizzas, cooked in a cast iron skillet to create a charred crust – it’s like biting into a deep pie,” said Kalogeracos.

In addition to the skillet pizzas, Kalogeracos has also developed a focaccia-style pizza base, inspired by his Greek grandmother, Yaya.

“The grandma style pizzas are a light, fluffy focaccia-style dough cooked in a baking tray. Growing up our grannies never had a round pizza tray at home, most of them had a rectangular baking tray and they used knowledge to make the dough. No measuring cups, no scales, just skills passed down to them from generation to generation,” he said.

This is how many of the pizzas at Theo’s & Co Pizzeria are developed.

“I often get inspiration from a certain flavour or dish and then recreate and adapt it for pizza,” said Kalogeracos.

“I used recipes from my childhood for the grandma pizzas. The skillet pizzas were inspired by trips to America and Chicago’s deep dish pizzas.

“There’s lots of taste testing involved with family members and especially staff. We get feedback and make refinements over the course of a few weeks before the finalising the recipe.

On the other hand, the vegan pizza, which was introduced in October, was developed in response to consumer demand.

“Vegan options in Perth are rather limited. We often had online questions asking whether we were vegan friendly, and although some of our products are customisable to suit vegans, we didn’t offer an exclusively vegan pizza,” said Kalogeracos.

“So we looked into the market and got in contact with instagrammer Andrea Brown. Andy met me in-store and trialled different combinations before deciding on a recipe. The Mrs. Potatohead is a thin crust base topped with soy cheese, three different types of potato, red capsicum sauce and a balsamic glaze.

“It took numerous experiments to find the right soy cheese product to use. The taste is subtler than mozzarella. We have to re-arrange the order of the ingredients and place the cheese on top and the soy cheese has to be in slices not grated like our mozzarella, otherwise the cheese burns in the oven.

“The response so far has been fantastic. Non-vegans are even taking the leap of faith and trying it. If this positive response continues we’ll introduce more vegan recipes in the future. Dessert pizzas are on top of the list.” When Parramatta pizza restaurant, Pizza Design Co. partnered with Menulog, the aim was to create a pizza the likes of which has never been seen. After some deliberation the partnership settled on a 23 carat gold leaf covered pizza.

“We sat down with Menulog and we wanted to do something different that hasn’t been done before. We thought, well, no-one has made a golden pizza,” said owner and general manager of Pizza Design Co., Nick Tsotras.

“We took a margherita and added the gold leaf. The gold leaf is imported from Germany, but we buy it through an Australian company. It’s 23 carat and edible; there’s no nutritional value it just looks great. The pizza is cooked as normal in the oven and then they go to the pastry chef to have the leaf applied.

“It doesn’t change the flavour or texture, that’s the beauty of it.”

While the idea was a no brainer, a lot of training went into perfecting the application.

“We had to work out how much to put on to make it look presentable. We use four sheets of 23 carat leaf and that covers the entire pizza. Around the perimeter is gold edible paste, the basil leaf is a gold paste, the 23 carat gold leaf is all over the pizza except the circumference,” said Tsotras.

“There was a lot of training and wastage involved. It’s thinner than paper, it’s very delicate. We had to work out what tools were best to use. We tried tweezers, and a few other things. At the end of the day we worked out that long toothpicks are the best. You can just peel the leaf off the film and place it straight on the pizza.

“But it’s very costly. It takes around five to ten minutes to lay it down.”

The cost of labour combined with the price of gold leaf means the Golden Margherita is quite a commitment, but it’s worth it according to Tsotras.

“They look like they’re from roman era, it’s the red and gold leaves – it’s great watching customers come in and take photos, they’re all so excited.” Nicola Piteo, owner of Summer Hill’s Da Vinci got the idea to create Sydney’s first charcoal pizza on one of his regular trips back to Italy, where charcoal isn’t an uncommon addition to many dishes.

“In Italy it’s a big thing, a lot of bakeries and pizzerias use charcoal, it’s common,” said Piteo.

While Piteo knew that charcoal bases were possible – having tried them himself – recreating them required experimentation.

“At the beginning we were putting too much charcoal in, and the bases weren’t coming out right. The charcoal kills the yeast a bit, so we have to add a bit more yeast. And then we realised they were better resting in a bit of heat, not in the cool room,” said Piteo.

Although the charcoal completely changes the colour of the base, Piteo said other differences between the charcoal and traditional bases are more subtle.

“The texture is crunchier than the usual bases, and our bases are already crunchier than the Napoli style bases because we put very little yeast and we don’t use  type 00flour. Instead we use type 1 and we mix it with wholemeal, and the dough is cooked in a lower temperature,” he said.

“Adding the charcoal makes the middle soft, not chewy, and the outside is crunchy but not hard. It’s difficult to describe, because it’s unusual. You only put one gram of charcoal in for two kilos of flour. It doesn’t alter the taste much, but it does give a smoky flavour.”

The choice to create a charcoal base wasn’t just about creating a novelty dish.

“It’s easier to digest, people who are intolerant of gluten – not allergic, but intolerant – feel better eating this base,” said Piteo.

The initial response was so great the charcoal used to make the bases ran out.

“We’re about to start making them again, and expect them to be back in store from November.”

Melbourne’s A25 has made a name for itself by offering innovative pizzas, with everything from the base to the toppings up for examination. However, owner Remo Nicolini is still a stickler for tradition when it comes to one thing – methods.

“I take things very seriously when it comes to the methods. Having lived in Italy for 15 years as a teenager and in my twenties, it’s in my blood. I like to use those traditional methods, but tweak them with today’s ingredients,” said Nicolini.

Instead of making Nicolini rigid about tradition, his early interactions with pizza have made him more creative.

“I take things very seriously when it comes to method, but we’re very inventive with the flavours in the toppings and bases, whether it’s squid ink or matcha bases.

“We use real squid ink and real matcha, there’s no colouring in either base and when you try the matcha you get the real green tea taste. Same with the squid ink.

“We don’t use chemical yeast in any of our bases. It’s all natural leavening – we’ve had the starter for six years. It’s a traditional process they used before yeast was discovered, and it’s a process we take a lot of pride in.

“Simplicity and method are how we improve the end the result.”

So where do they ideas come from?

“We’re not making Napoli or Roma style pizzas. We just want to be the best product,” said Nicolini.

“Sometimes that means going against tradition. Our pizza with licorice, dates and sausage is something you would never find in the south [of Italy]. You might find it up north; they’re a bit more adventurous. We consider all of that and do our own take.

“At the moment we top the matcha base with our take on stracciatella soup; so it has eggs, parmesan, rocket and pomegranate. We’ve come up with a new combination of pureed corn and grilled chicken with Italian seasoning finished off with coriander and beetroot relish. Those are ingredients Melbournians love.”

Although simplicity is key, the process of developing new combinations, whether they be toppings or bases, is complex.

“It’s about working out what ingredients work well together. We have a team of amazing chefs and we all sit around the table and work things out. We don’t just randomly throw ingredients together.

“Even though there are so many Australian pizzerias now, we’re still raw when it comes to pizza. People think it’s simple, but it’s not, it’s complex. It takes a lot of experience, experiments, work behind the scenes, and trials with different flours, different leavening methods, different cooking temperatures, and different resting temperatures.”

While not every attempt has worked out, Nicolini firmly believes in the importance of this process, whether it results in failure or success.

“We had beetroot base that didn’t hit the mark, but trial and error is a beautiful process. That’s the beauty of this game. You never stop evolving, and the moment you do you get left behind. That’s why we try to push the boundaries.”