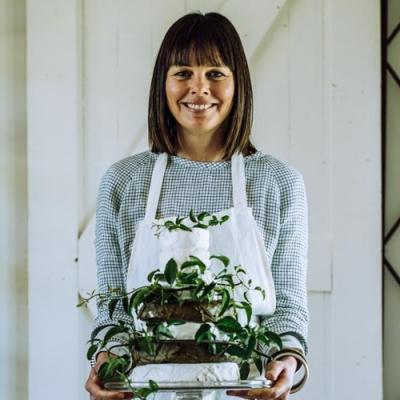 Initially Cherie’s ‘in’ to the food world was through tea; drinking copious amounts of it, which led to sourcing and growing her own ingredients, and then to hand blending. The Scullery was where that all happened and Scullery Made Tea was born, and is now stocked extensively throughout SA cafes and restaurants, including The Art Gallery of SA, Penfold’s Magill Estate, and Maggie Beer’s Farmshop, to name a few.

Dividing her time between freelance food writing and styling in Sydney and the restaurant she co-owns in Bangkok, Cherie Hausler made a ‘tea change’ to include the Barossa Valley when she decided the only way to balance her food-filled life was to add an organic veggie patch and some rescued animals into the mix.

Juggling the renovation of a 175 year old bluestone farm house in the Barossa, has given Cherie the perfect country base to grow and collect seasonal fruits and herbs to hand blend for her tea range. Dedicated to the experience of good food in its entirety, Cherie believes there are very few things in life that can’t be helped by a proper cup of tea…

While Sydney may have been the place Cherie gained experience on-air with 8 years in the TV industry, along with food writing for various magazines, including her own regular vegetarian column in Delicious magazine; the Barossa was the place that she was really put through her paces creating her own range of vegan products for the local Farmer’s Market, pop-up events she devised and ran and her own plant-based retail store in an old fire station. Cherie also spent 13 years consulting to Maggie Beer; writing, food styling and brand developing. The common thread is always good food. All of this has been the foundation of her latest venture which involves everything she loves about delicious food being naturally good for you. As she says, “It’s all the things because it’s All The Things”, the kind of food you reach for first, without even knowing that it’s 100% plant-based, organic and whole, more often than not gluten free, and quite often raw. Nutrient dense, essential nourishment of a particular kind that ticks all the boxes.

The range draws on Cherie’s well established Barossa based food background; as a food stylist and writer, tea blender, recipe developer and co-owner of Eat Me restaurant in Bangkok, she explains her enthusiasm for All The Things, “Having been part of the food industry for over 20 years, All The Things began a year ago, with the simple mission to make delicious food that just happens to be vegan. I think we all know how great it is to enjoy the health benefits of eating more plants, but when I became vegan, I really missed certain aspects of entertaining with friends, or special occasions where we would rely on the familiar indulgences of cheese, chocolate, and butter, amongst others. I knew there had to be a way to have these delicious foods in a manner that didn’t compromise our health, ethics or tastebuds. I’ve started by creating plant based versions of the foods I’ve missed most, and the list of ideas keeps growing, so there’s no need for anyone to miss out!”

High Tea, With a Twist