The Colors of Sustainability Sustainability, simplicity and sourcing are at the heart of young super chef Charlie Carrington’s latest venture.

Carrington, head chef and founder of Atlas in South Yarra and the new Colours by Atlas, wants to create a new wave fast food chain.

And if anyone can do it, Carrington seems likely. After dropping out of school almost a decade ago to pursue his foodie dreams, the 24-year-old soon after became the youngest chef in history to be awarded a Hat.

As the name would suggest, Colours by Atlas, which opened in February this year, is the younger sibling, more relaxed spin-off of Atlas. Carrington has reworked Atlas’ rotating cuisine idea, where a different region is profiled every season through a set menu.

Carrington has tossed in a very generous portion of sustainability into the Colours menu palette.

“As a business, there are many layers of sustainability and I like to compare it to peeling an onion, it’s just a question of how many layers you want to peel,” says Carrington.

A sign on a wall at Colours reads loud and clear that “we’re serious about sustainability” and it’s their mission to “ban the bin”.

Carrington has set a goal of producing a maximum amount of 120 litres of waste per week across both his venues, which is the equivalent of just one household bin. The average Australian produces 1200kg of waste per year, so the target is to produce less rubbish than three people. 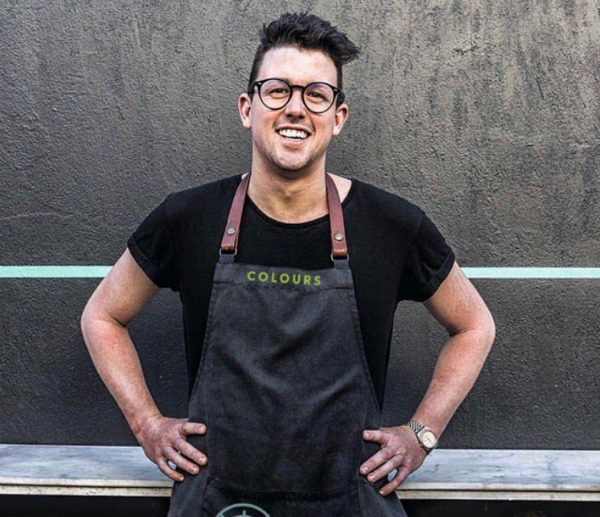 This bold goal of Carrington’s has the ability to positively influence the entire supply chain. He refuses the delivery of plastic-wrapped herbs for this reason, and he’s working with meat suppliers to find sanitary packaging options that aren’t plastic.

“We will only waste things that are no longer usable, like broken food storage containers and anything else that would impact safety and preparation practices,” he says.

“All our food scraps and compostable packaging are thrown in compost, excluding our PET lids for drinks which are recycled, and the compost bins are emptied weekly and taken to a farm where it is stored for three months then rotated and stored for another three months.

“This practice will heat the compost up to 65 degrees and break down all organic matter then it can be used as fertiliser in farming to help the regeneration of topsoil and promote healthy ecosystems.”

The speed and ease of enjoying a meal at Colours is the same as going to a fast food chain, but the presentation of the dishes say otherwise. Naturally with the environment in mind again, eat-in meals are served on ceramic plates (designed locally, of course) with stainless steel cutlery, and take-out is dished up in compostable sugarcane pulp bowls complete with FSC-certified Birchwood cutlery.

For Carrington, these bowls were a natural fit, being extremely durable, lightweight, inexpensive and biodegradable in 30-90 days under compost conditions. Not one to miss a trick, Carrington also pops his brand on the bowls with local brand Black Rainbow stickers, non-toxic and vegetable-based ink.

And if he’s making sure the herbs are wrapped properly, you can bet your bottom dollar Carrington also knows exactly where they’re sourced from. He has a tight list of ten or so suppliers that he exclusively deals with.

He works with Mossy Willow Farm, a 24-acre organic farm in Mornington Peninsula, which caters to the changing Atlas menu by growing select produce exclusively for the restaurateur at specific times of the year. It’s a ‘no till’ farm so no carbon is released from the soil back into the atmosphere.

In the medium-term, Carrington is hoping more than 80 percent of the produce at his venues will be organic. All the meat is already antibiotic and hormone free.

Carrington can’t give away all his secrets; he still has a lifetime to trickle them out. It’s in his nature though to always keep ahead of the curve.