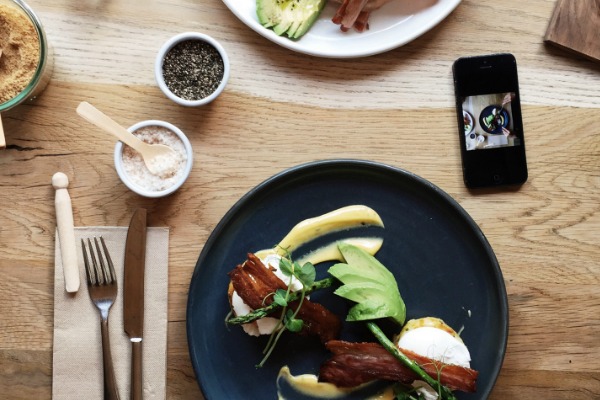 The phenomenon of eat and post has flooded social media, with mouthwatering #foodporn photos now taking over our newsfeeds. It’s become the norm to see people sitting in restaurants, snapping up photos of their meals before even taking a taste.

Eating is, and always will be for many, a form of socialisation, with many using it to help create a certain ‘social status’ online. They’re looking for trendy places to eat or the most recent food to take over their newsfeed in order to boost their own personal brand. This new trend means it is now more important than ever for chefs to prepare meals that not only please taste buds, but also are visually pleasing.

Celebrity chef Neil Perry spoke recently to the Australian Financial Review about how social media was an important part of his leading restaurant, Rockpool. Explaining: “Humans are very visual. And customers can have a conversation about what they have seen online with me in the restaurant.”1

This ongoing trend has also seen the development of proclaimed food bloggers, opting for new food innovations and venues that offer something different in order to entice followers. As a basis to success, food bloggers look for truly ‘Instagrammable’ meals with a difference, in order to gain interest.

However, it doesn’t take a food blogger to post up the latest food trends. With over 85% of Australians reported as owning a smart phone, it has all been made too easy. Not only do we have instant access to photos, we can also access dining information at the swipe of a screen.

Instagramming meals isn’t everyone’s favourite form of photo either, specifically some chefs who have taken to the social media trend with chagrin. Heston Blumenthal, in particular, has spoken out against the proclivity for diners to snap before eating, claiming it’s a widespread problem in the industry. Alongside the possible invasion of privacy of other diners, it’s about the issue of disengagement.

“At the end of the day, sometimes people take pictures from the moment they get somewhere and the camera disengages them from the emotion of being in the environment and the moment, as opposed to taking in the atmosphere, smelling, seeing, hearing, touching, feeling, all of those senses.” Heston told the Daily Telegraph.2 Chefs craft meals beyond taste buds, incorporating visual elements and sensory blends to create a dining experience. Unfortunately, some diners are too busy framing their shot for Instagram to realise what’s in front of them.

Another salient point that’s left a bitter taste in the mouths of some chefs: it may seem like social media has provided those within the food industry the cheapest and most effective form of advertising, but it can also be rather damaging. Customers have the opportunity to surf online reviews, look at food images and articles about your establishment before even giving it a try. Combatting any negative reviews or perceptions (especially from a customer who hasn’t even eaten your food!) is about effective social media management, where you create and sustain the images and narrative, responding to critical reviews or images.

2 Stephenson, A., 2016, Daily Telegraph, Heston Blumenthal on taking photos of your food and his once-in-a-lifetime food experiences