Women in Foodservice: The New Rulers of the Kitchen 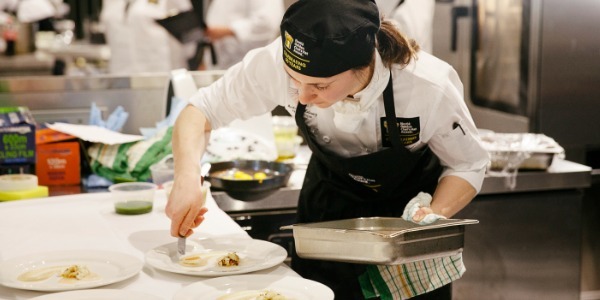 They say that behind every great man is a great woman, but when it comes to foodservice, women are most certainly not waiting around behind men in order to gain recognition. A recurring theme has been popping up in recent food news, highlighting the work of – and appreciation for – women in the foodservice industry. While we must admit it’s still not as recurring as we’d like it to be, the growth in recognition for women making their mark in the hospitality and foodservice industries is something that should be celebrated.

Heat in the Kitchen

The unfortunate truth is that women have been making names for themselves for years in the industry, but previous appreciation or awareness has been minimal. The issues that women face in the hospitality and foodservice industry are similar to those faced in other industries. Pay inequality is continually a fraught topic of discussion, while kitchen politics render many female chefs ‘fighting’ for jobs in the kitchen that are often deemed ‘too hard’ for women to do. In fact, chef Margot Henderson penned an article for Vice Magazine titled ‘The Restaurant World Is (Still) Sexist’, saying: “I do believe that women are maligned in kitchens. I constantly have to fight in my own kitchen. Even my own female chefs at my restaurant have to fight to prepare meat, to brown the meat. Male chefs prefer to have women preparing vegetables and pastries.”

Rising to the Top

Despite experiences such as Margot’s unfortunately still occurring, there is equally a movement against gender discrimination gathering momentum. With each new piece of news and accomplishment highlighting the successes of females in the industry comes a very clear message that women are changing the face of foodservice.

At a recent panel interview for the World’s 50 Best Restaurants, chef of two-Michelin starred restaurant Atelier Crenn, Dominique Crenn, posed a striking response to a journalist who questioned if she’d “missed out on motherhood” in order to become a successful chef.

Highlighting that she was in fact both a mother and a chef, she argued that “we need to stop pretending that we are all the same, but [I] also think we need to change the conversation around this.” Crenn made it clear that how she handled her role as a chef and as a mother was no different to how a male chef handles being a father.

We’d be remiss not to mention the women taking great actions for change already: Karen Keygnaert is a chef who isn’t just known for her delicious food (or refusing a Michelin star), but for opening a restaurant staffed entirely by women. Of course we must highlight Ana Ros, of Hisa Franko, winner the World’s Best Female Chef award for 2017 (albeit the discussion of why such an award exists is an entire debate in itself).

As women start to be acknowledged for their rightful, respected place in the kitchen, more chefs are willing to speak out. Quay and Bennelong head chef Peter Gilmore said he “…found that a mix of females and males in the kitchen is a much better work environment. There is a more equal balance in kitchen. I’d love to see more women staying in the industry to reach their full potential.”

The conversation around women and the amazing work they are doing in foodservice and hospitality is definitely one that should be continued. Fine Food Australia is proud to be supporting women in the industry with the Women in Foodservice Charity Event. The 2017 show marks the third year that the event will take place, with women from the industry gathering together to hear from inspirational speakers, engage with each other, and to celebrate everything that women bring to this incredible industry. Find out more, or book tickets for the Women in Foodservice Charity event here.